The Chancellor of the Exchequer gave his Autumn Statement to Parliament on 23 November 2016. Here is a summary of what was announced that we feel may be relevant to our clients.

We've summarised new thresholds for 2017/18 below, although please note some of these remain unchanged from the current year: 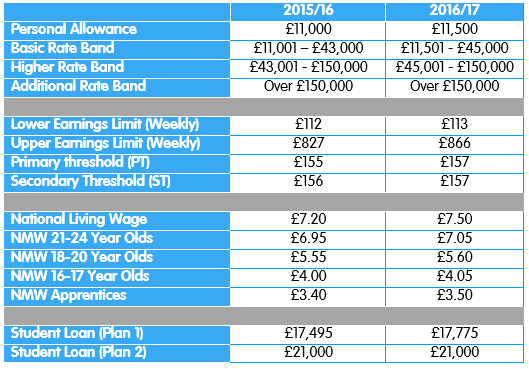 Other points to note:

The tax and employer National Insurance advantages of salary sacrifice schemes will be removed from April 2017, except for arrangements relating to pensions, childcare, Cycle to Work and ultra-low emission cars

The government will consider how benefits in kind are valued for tax purposes, publishing a consultation on employer-provided living accommodation and a call for evidence on the valuation of all other benefits in kind at Budget 2017.

The government will publish a call for evidence at Budget 2017 on the use of the income tax relief for employees' business expenses, including those that are not reimbursed by their employer.

From April 2018, termination payments over £30,000, which are subject to income tax, will also be subject to employer NICs. Tax will only be applied to the equivalent of an employee's basic pay if their notice is not worked, making it simpler to apply the new rules.

The first £30,000 of a termination payment will remain exempt from income tax and National Insurance.

Tax-Free Childcare will be introduced gradually from early 2017, with rollout beginning upon completion of the trial. Once the scheme is fully rolled out, the government will review its operation to ensure it is delivering as intended and to assess the benefit it is delivering for working parents.

The government will introduce a new penalty for any person who has enabled another person or business to use a tax avoidance arrangement that is later defeated by HMRC. Details will be published in draft legislation shortly.

The government will also remove the defence of having relied on non-independent advice as taking 'reasonable care' when considering penalties for any person or business that uses such arrangements.

This will ensure that self-employed users of these schemes pay their fair share of tax and National Insurance. Further, the government will take steps to make it less attractive for employers to use disguised remuneration avoidance schemes, by denying tax relief for an employer's contributions to disguised remuneration schemes unless tax and National Insurance are paid within a specified period.

Off-payroll working in the Public Sector

Following consultation, the government will reform the off-payroll working rules in the public sector from April 2017 by moving responsibility for operating them, and paying the correct tax, to the body paying the worker's company (PSC).

This reform aims to tackle the high levels of non-compliance with the current IR35 rules and will mean that those working in a similar way to employees in the public sector will pay the same taxes as employees.

The 5% tax-free allowance will be removed for those working in the public sector, reflecting the fact that workers no longer bear the administrative burden of deciding whether the rules apply.

The government will introduce a new 16.5% rate from 1 April 2017 for businesses with limited costs, such as many labour-only businesses. This will help level the playing field, while maintaining the accounting simplification for the small businesses that use the scheme as intended. Guidance which has the force of law, published alongside the Autumn Statement, will introduce anti-forestalling provisions.

For further information on any of these changes, please feel free to contact PayStream for details.