With Easter, the new tax year and changes to Travel and Subsistence just around the corner we have been very busy in the Operations Department.

Our Umbrella Expenses Team are sacrificing their Easter Egg Hunts to come into the office to ensure as many of your contractors expenses claims are processed in time for payment.

As per our Umbrella Expenses Policy, your contractors can only offset expenses against the income received in the tax year in which the expense was incurred. Therefore once the tax year has ended any unapplied expenses will be held in our systems but not applied to their future payments. They should then be able to claim these expenses directly from HMRC via a P87 or a Self-Assessment Tax Return. HMRC will review their claim against their earnings and liabilities and may refund any overpaid tax.

A new National Living Wage (NLW) will be introduced from 1st April 2016. Initially the rate will be set at £7.20 per hour, rising to £9 an hour by 2020. The NLW will be compulsory for all working people aged 25 and over.

The National Minimum Wage (NMW) will still apply for all employees aged 24 and under. These rates are usually updated every October and the current rates can be found in the table below:

We've summarised new thresholds for 2016/17 below, although please note some of these remain unchanged from the current year:

The tax year 2016/2017 will see the implementation of a new Student Loan plan. This change will take effect from the 6th April 2016, which will see the introduction of two "plan types" termed Plan 1 and Plan 2.

The Scottish Rate of Income Tax (SRIT) was introduced in the Scotland Act 2012. Changes will come into effect on 6 April 2016 and, most notably, we will see the introduction of the 'S' prefix to denote that the respective employee is a Scottish tax payer. This will make it possible for a proportion of the Income Tax generated to be paid to the Scottish Government.

Your contractors should ensure that they are on the correct tax code in 2016/17.

For further information of key dates coming up in the new Tax Year, please refer to our timeline below: 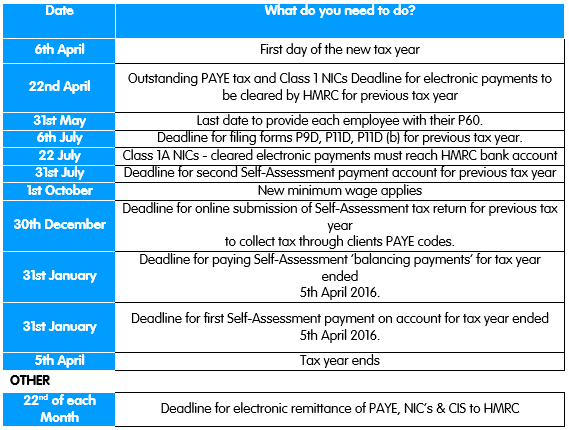